Visit the Library Makerspace on the second floor!

What is an AR Sandbox?

Cal Poly Humboldt students created the AR Sandbox just before the opening of the Makerspace. Their project was actually inspiration for the Library to become more involved in supporting students with innovative projects.

In spring of 2018, Sean Fleming, Joshua Shindelbower, Casey Thompson, and Kevin Thuresson developed the first iteration of the AR Sandbox as part of Jim Graham's GSP 318: Spatial Programming class. After completing the project, they moved the sandbox into the library and they made several updates and iterations to the version that is in the Makerspace today. The final implementation was a group effort that included the original students as well as ITS and library staff and faculty.

Currently, the AR Sandbox is being maintained by the Library Makerspace. If you have any questions or suggestions, email us at dml@humboldt.edu.

The AR Sandbox is a project that was originated in 2014 at UC Davis' W.M. Keck Center for Active Visualization in the Earth Sciences (KeckCAVES). Their extensive documentation and instructions have allowed others to replicate the project in various locations around the world. The UC Davis AR Sandbox site is no longer up and running but an archived version can be found through the Wayback Machine (see links below).

The resulting augmented reality (AR) sandbox allows users to create topography models by shaping real sand, which is then augmented in real time by an elevation color map, topographic contour lines, and simulated water. The system teaches geographic, geologic, and hydrologic concepts such as how to read a topography map, the meaning of contour lines, watersheds, catchment areas, levees, etc.

The U.S. Geological Survey currently has AR sandboxes at various locations throughout the U.S. You can visit their Augmented Reality (AR) Sandbox site for more details about their implementations and locations. 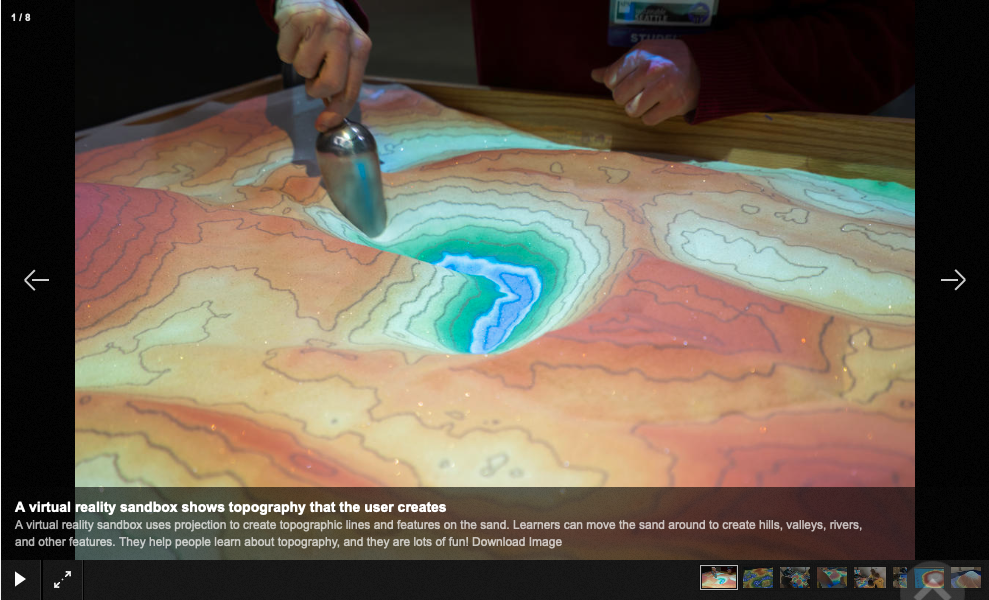 How can I make my own AR Sandbox?

While the AR Sandbox is built on old tech (Windows has discontinued manufacture of the Kinect motion sensor), there are quite a few AR Sandboxes throughout the world, with some companies selling their own versions (search 'ar sandbox' to find several companies).

If you'd like to set up your own, check out the in-depth information from System76, a Linux laptop and desktop manufacturer, as well as the original documentation from UC Davis, now archived with the Internet Archive's Wayback Machine.

What you will need

Note: the software has been updated since this original documentation. Some of the terminal commands and file paths may be different if your implementation uses the updated software. You may need to follow these instructions along with the System76 instructions (above).