Learn more about how the HSU Library can help
support your fully online research and learning needs.

A guide to the basics of creating a podcast.

The following write up is a description of the process that SkillShops Student Assistant, Marie Lopez, went through to create her capstone project podcast. It includes how she decided on her topic, some of her inspiration, and the process of finding, recording and editing the audio together. Marie used Logic Pro, but the same approach works with almost any audio editor you choose. If you don't yet have a favorite audio editor and are looking for some pointers on getting started, you might want to take a look at the Podcast Basics SkillShop, where you can earn a badge while you create your first micro podcast (if you'd like to earn the badge, be sure to login to the Canvas version to submit your micro podcast).

And if you like Marie's podcast (scroll to the bottom of the page for a listen) and approach to creating, you should also check out her Maker-in-Residence internship project, Voices.

What is the Project?

For my international studies capstone project, I was able to choose any method of presenting a researched topic relating to global issues. Having worked with audio for a number of years, I decided I would try my hand at making an informative-type podcast. I was inspired by the video work of creators on the educational world of YouTube, such as CGP Gray and Wendover Productions, as well as some NPR podcast episodes I have listened to every now and again.

I knew I wanted to make an episode about food as it related to geopolitical events in history. I have been fascinated for years by the origins of many of what would now be called “common foods” in the US: tea and oranges are thought to originate from China, coffee from Yemen, black pepper from India, etc. My family being from southern Mexico, I wondered about what foods are native to that region, and the Americas in general. I was astonished to find that not only the seemingly obvious avocados, corn, and chili pepper were native to Mexico and the Americas, but also potatoes, beans, chocolate, peanuts, and -- what was most surprising to me -- vanilla. Vanilla is so synonymous with “ordinary, plain, default.” And the times it is given some geographical context, you see it named as “French vanilla.”

In the podcast episode, I talk about how this native Mesoamerican crop was taken and spread throughout the world by colonial European powers. I then compare it to the story and current state of the avocado. Unlike vanilla, avocados today are strongly associated with Mexican cuisine. But could avocados meet the same fate as vanilla? As in, delocalized and no longer associated with their native region? The episode hints at how global demand and the restrictive history of the US on Mexican-grown avocados could impact this strong association with Mexico.

I started with the research. I think the most interesting yet time consuming part about research is following some rabbit holes and seeing where the articles take you. I knew I wanted to talk about the economic state of avocados today, as well as a general overview of vanilla’s history. Other than that, I anticipated that the details would come about through the research. I found some golden articles that answered all my questions and more. Other times, there were around the subject I needed, but would point me to terms I would need to look at. The research took the most time in the project, and would have been longer if I didn’t already have some knowledge in global history and issues.

Writing the script was the next step. One of the trickiest parts of writing the script was trying to not over-emphasize the parts I found the most interesting, since that risks skimming over the other information that makes the script cohesive. If I had more time (like if this was a full-time project and not just one of many assignments) I would have spent more time on the transitions between subject and on the conclusion.

With more time, I would have gone through multiple drafts of the script, annotating and marking up what parts needed changing before recording anything. Instead, the “faster” way I went about it was recording the rough draft, then listening for grammar mistakes and modifying the parts that needed to be changed in order to sound better read aloud. This is a pretty messy method because when recording, I stumble a lot more if I am aware of all the little errors along the way and begin to second guess everything. It would have been better for me to record with a more polished draft and the peace of mind that comes with that.

Finally, there is the actual editing. To me, this is the “grindiest” part of the project. It’s a lot of split and cut, split and cut. It’s a lot of finding the end of the waveform right when a word ends, and making an edit sound as non-distracting as I could. It’s also some re-recording small bits and readjusting the timing of certain moments of the episode. To organize the edits, I placed each section of the episode into different tracks, and each background music track. I used Logic Pro because it’s the audio program I am most familiar with. I didn’t have to do any fancy compression or add many effects, but I did use some volume automation for the music tracks I used. 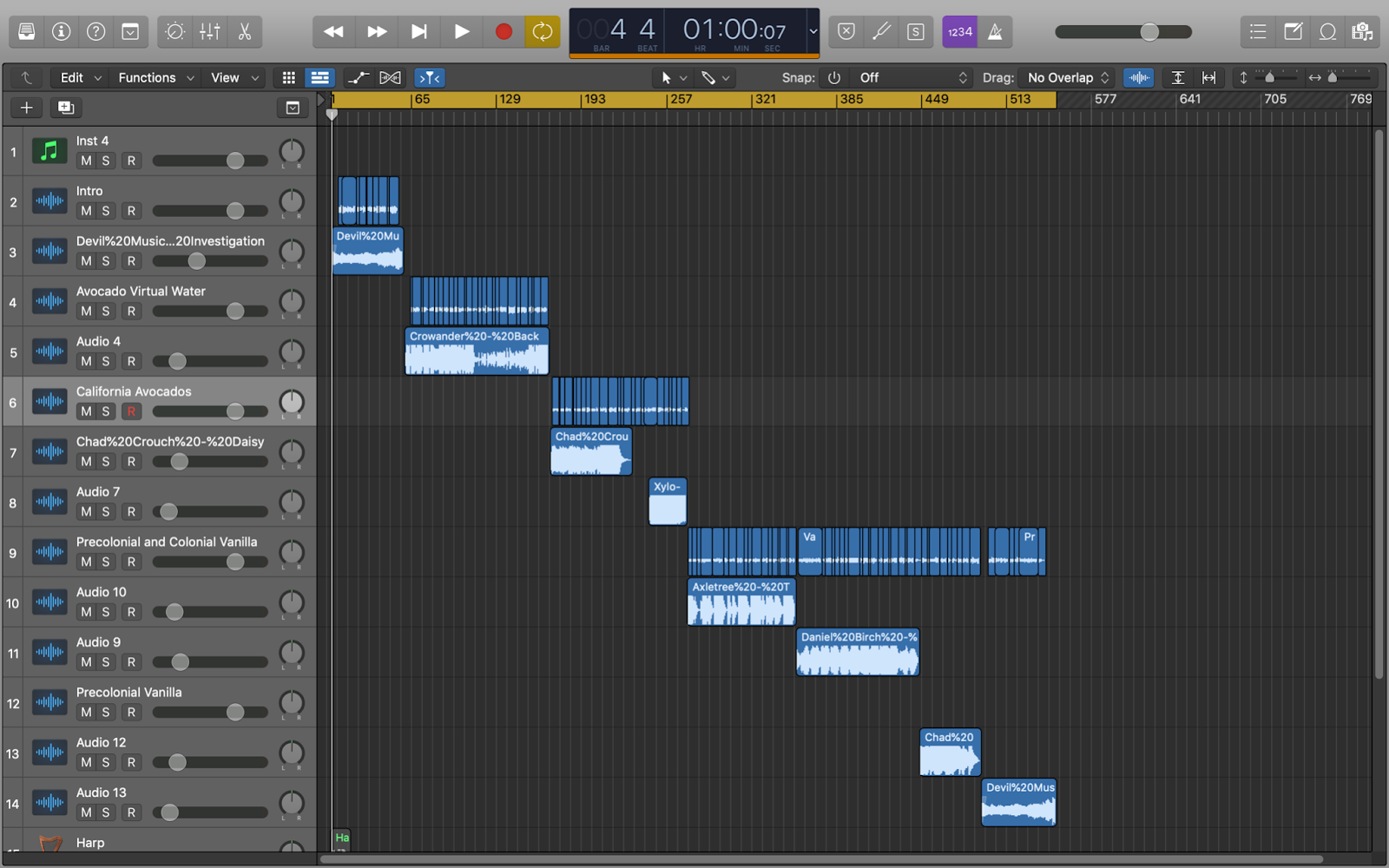 Overview of project segmented into sections in Logic Pro X. 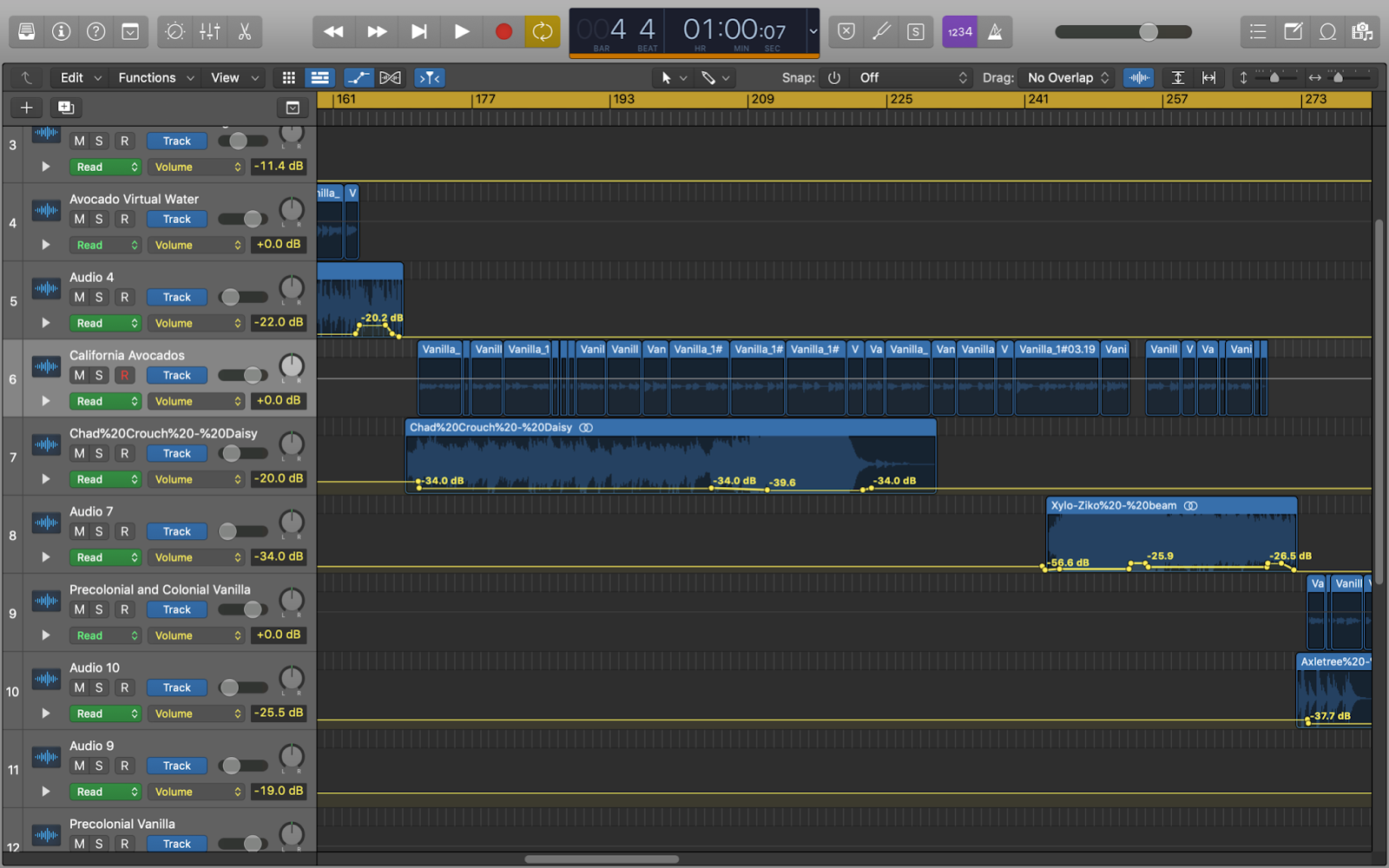 Example of volume automation for some tracks (the yellow lines).

The music tracks were taken from a royalty free website. It was quite an endeavor in itself to find those tracks because there was a specific mood and aesthetic I was going for: mysterious, pensive, and a little bit somber.

Although the podcast episode was about food (Mexican foods in particular, which is strongly associated with festiveness and joy), the episode was also about colonial extraction and cultural degradation. I wanted to re-frame the globalization of food as not merely an interesting aspect of history, but as reality that is inherently violent and

disturbing. That underlying idea hints to the name of the podcast: Uprooted. Taken right from the soil. However, looking back on it, it’s a misleading title. Because the roots of the cultural traditions of these crops are still here, and still alive. Communities of indigenous Mexicans are still here, doing important decolonial work to maintain their ways of life. Institutional research can only get one so far, but it’s a starting point, and I’m glad I started somewhere on learning about the impacts of the globalization of food.